As Mahmoud’s camera flickers on over zoom and we start to chat, I am struck again by his composure and succinct articulation. Mahmoud Makkawi is 15 years old and lives in Edinburgh where he attends the Currie Community High School. He is passionate about climate justice and participated in and moderated panel discussions held last year as part of the Education for Climate Justice Workshop series co-organised by the Third Generation Project. In our interview, Mahmoud shared his thoughts about climate change education in schools, the workshop series and what just international political action around climate change should look like.

Annabelle: What aspect of climate change preoccupies you most?

Mahmoud: I think climate justice…when it comes to the harmful effects of climate change it’s usually the countries who aren’t the major emitters of greenhouse gases, those who aren’t majorly responsible for what’s happening, they’re usually the ones who get affected the worst and aren’t financially capable of bouncing back from whatever disaster happens.

Annabelle: What do you learn about climate change in school?

Climate change and climate justice should be part of the curriculum from primary school. You can start with just little things in terms of sustainability, like switching the lights of when you don’t need them, but as you move up through secondary school it should be increasingly complex, like understanding how corporations are affecting greenhouse gas emissions and what we need to be doing as a nation to combat this.

Annabelle: How do we deal with the emotions that talking about climate change can evoke, in schools, especially with children of different ages?

Mahmoud: [The emotions] are something that occurs through learning about climate change when you find out it’s a crisis and could have devastating consequences. People have the right to feel anxious about that, because the way we are dealing with it seems quite slow and not as revolutionary or quick as it could be. I think that’s what causes anxiety. It’s important as well to combat this anxiety, because although oil tycoons and coal mining and all that stuff is one of the major reasons of why there is so much pollution in the atmosphere, taking small steps and making local changes can have a big effect as well.

Annabelle: In what other spaces outside of school do you learn about climate change?

Mahmoud: I was introduced to climate justice via SCOREScotland, they’re this charity that works in Midlothian, and they help impoverished families to have the same opportunities that other people have in richer areas. I was doing my Duke of Edinburgh [Award] and for the volunteering part, I participated in the Education for Climate Justice workshop series which SCOREScotland introduced me to.

Annabelle: Can you tell us about your reflections on the Education for Climate Justice workshop series we did together last year?

Mahmoud: I think [the workshops] went well. I think it was an effective way of educating people about climate change and climate justice and what we can do to help prevent such things from occurring or becoming worse, that was one of the best things about it. One thing that could have perhaps been improved would be to have had more workshops. Climate change is such a big subject, and there is a lot of conversation and debate to be had around it. So, three was good, but five or seven could have been even better.

The workshops were quite restricted, in the sense that people from my school wouldn’t have known about them, nor would people from my local area. Spreading the word more would have made young people more curious to attend the workshop series. That might have helped inspire some people to take an interest in climate activism. Supporting young people who are curious about climate activism is so important. Helping support them to have their voices heard whether that is through a youth club or in school. Schools should have the resources to be able to do that and likewise with universities and colleges.

Annabelle: How do you think young people should be involved in developing Climate Justice education?

Mahmoud: I know that there’s a youth parliament in Scotland, but I don’t think it’s necessarily heard from. It feels quite tokenistic. Any sort of discussions or conversations, they aren’t really taken into account as much as adult parliament, and I think that shouldn’t be the case. I am quite certain changes to the curriculum have been brought up during the youth parliament, but it’s just something which isn’t really listened to in the bigger Parliament, the Scottish Parliament. I think it’s really important [that young peoples voices are heard] because, you know, although we may be younger than most politicians, that doesn’t make our voices, our opinions, any less valid.

Annabelle: What are your thoughts on COP26 and international climate action?

Mahmoud: I think it’s good that it happened, its excellent that countries are taking steps towards mitigating climate change, but I don’t think they were being radical enough, I don’t think they were taking big enough steps to help solve the global temperature rising. The emissions cuts they agreed upon do not keep us to below 1.5C warming, so its not good enough. Major emitters have the weakest targets like Australia and China, and I think that’s a major credibility gap because they are not taking responsibility for what they are doing.

I think we should be encouraging a renewable energy transition much more, it needs to be more heavily invested in. I know there is a lot of hysteria around using nuclear power for example, when I think its quite misplaced because nuclear energy is one the more efficient energy sources we have.

At the same time, I think its important that we help developing countries develop. I don’t think its fair if developing countries in Africa for example, when they’re trying to develop and they want to use oil and gas like we have, and we sort of stop them and say ‘no you can’t do that, because it’s bad for the environment’ – I don’t think that’s fair. We should help countries find sustainable ways of producing the amounts of energy that will help them to develop. In 2009, there was an international agreement to give $100bn to developing countries by 2020 to become more sustainable but they didn’t meet that goal, they only met $79bn, which is still a massive amount of money, and I can’t even imagine in my head how much money that is, but they keep falling short of their goals.

Annabelle: What does climate activism look in your life?

Mahmoud: My activism revolves mainly around educating others on what they can do and try my best to inspire others to take similar steps. I don’t think I’m that great of an activist, I’m just a guy who won’t stop talking about the climate. What’s important is getting people to talk, which is much more helpful than other people might think. Sometimes I feel like I can’t make room for it, though. I am preparing for my prelims and working hard and sometimes I find it hard to fit in activism into my day-to-day schedule.

On that note, we wish Mahmoud the best of luck with his prelims and hope he continues to not stop talking about the climate!

Read more from the Frontline... 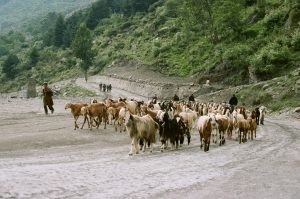 “This is my profession since my grandfathers and forefathers; to travel and bring the goats and sheep to mountain areas in summer and go in winter back down to Haripur for 7 months of the year… The past seven years, the forest department stop us.” 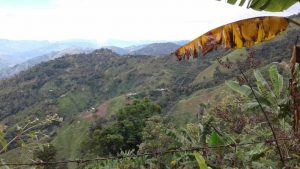 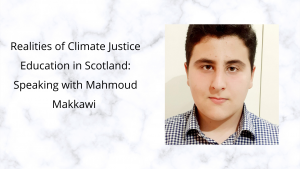