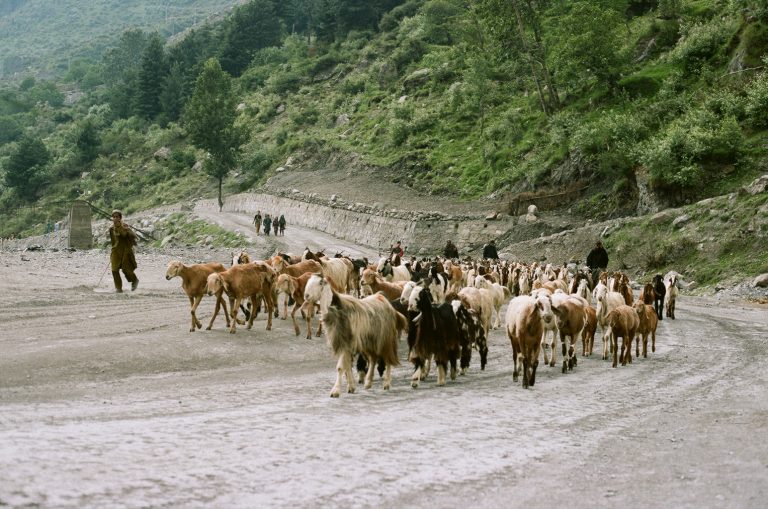 Members of the Bakarwal community herding their animals along a road through the Kaghan Valley, Khyber Pakhtunkhwa. Photo by Jamie Hinch, TGP.

This edition of the Frontline was written by Jamie Hinch, TGP’s Development and Learning Coordinator. As part of Jamie’s research for his Master’s thesis, he visited Pakistan with the World Wildlife Fund, convened by organisations Pilio and Hima^Verte. His aim was to understand how climate change was being felt on the ground alongside what mitigation measures the Pakistani government was taking in response to stronger natural disasters. Below, Jamie shares his conversation with Nazir from the Bakarwal community of mobile pastoralists on one specific mitigation measure- the 10 Billion Tree Tsunami Afforestation Programme.

“This is my profession since my grandfathers and forefathers; to travel and bring the goats and sheep to mountain areas in summer and go in winter back down to Haripur for 7 months of the year… The past seven years, the forest department stop us.”

It was only this year that Pakistan made global headlines after the country of 225 million people experienced unprecedented consecutive natural disasters. Not only did most of the Indian subcontinent experience the most extreme heatwave on record(1), but as a result of the stronger monsoons that followed, a third of Pakistan was left underwater(2), displacing millions.

It was in June 2022, towards the end of the heatwave, when I visited Pakistan’s northern province of Khyber Pakhtunkhwa (KP) to better understand the country’s landmark environmental initiative- ‘the 10 Billion Tree Tsunami Afforestation Programme’ (hereinafter, 10-BTAP).  This state-backed, spectacular tree-planting campaign began in 2019 under the auspices of former-Prime Minister Imran Khan, with the hope of planting 10 billion trees by 2030. This marks one of the largest afforestation attempts in world history. Consequently, 10-BTAP has received worldwide praise with Pakistan labelled as ‘leading the way’ on environmental action (3). Plaudits also commend how, as a ‘nature-based solution’, 10-BTAP has ‘community engagement and job creation’(4) as core objectives.

My angle for the research was to understand how these monumental nature-based solutions impact communities on the ground. Across the world, large-scale environmental projects, from national parks to dams, have historically displaced communities, and particularly those most marginalised. This Frontline article comes out of my experiences engaging with the Bakarwal people, who revealed that the 10-BTAP was actively excluding and further marginalising them. Specifically, I reference the story of Nazir, a member of a Bakarwal community that is trying to continue its intergenerational practice of migratory pastoralism in the face of discrimination, climate change, and increasingly restrictive land access policies in Pakistan. On a windswept hillside caught between the tree and snow lines along the Himalayan Kaghan Valley of KP, Nazir explained how 10-BTAP is causing and exacerbating issues they face as a marginalised community. 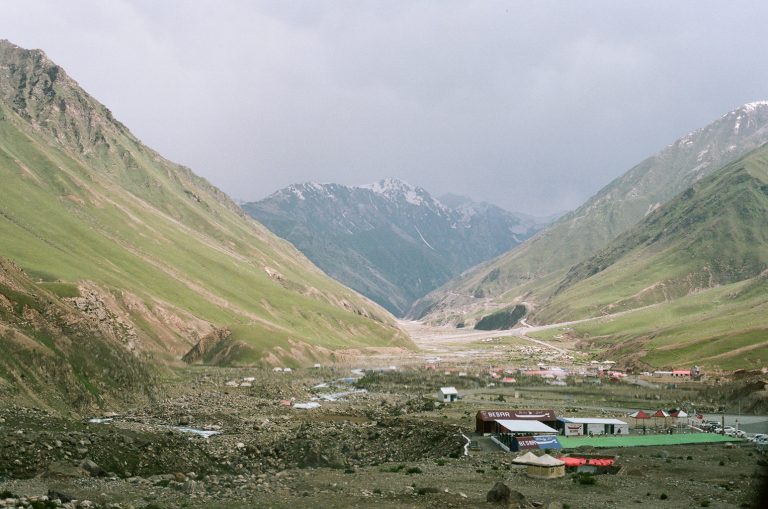 Above the tree-line in the north of the Kaghan Valley, close to the town of Jalkhand.
Photo by Jamie Hinch, TGP.

While the following story may appear to be about present-day injustice, its roots are far older. Nazir referenced the experiences of the Barkawal people and British colonialism. On the one hand, Nazir admired British rule: “My grandfather told us that during the British period… justice was the same for all the peoples; No difference for the nomadic peoples or others. Now, it is totally different.”  However, as a result of how Britain ‘decolonised’ and left the Indian Subcontinent, the Barkawal people were left systematically marginalised. For example, Britain handed large tracts of land to ‘nawabs’, or local barons. Nazir noted that the land has remained under the management of nawabs ever since. This has been detrimental to the mobility and self-determination of Bakarwal people. They have historically existed as mobile pastoralists, migrating between lowland plains in the winter and mountain pastures in the summer; the Kaghan Valley is a corridor between these seasonal grazing sites and intersected with the Bakarwals’ traditional migration routes. 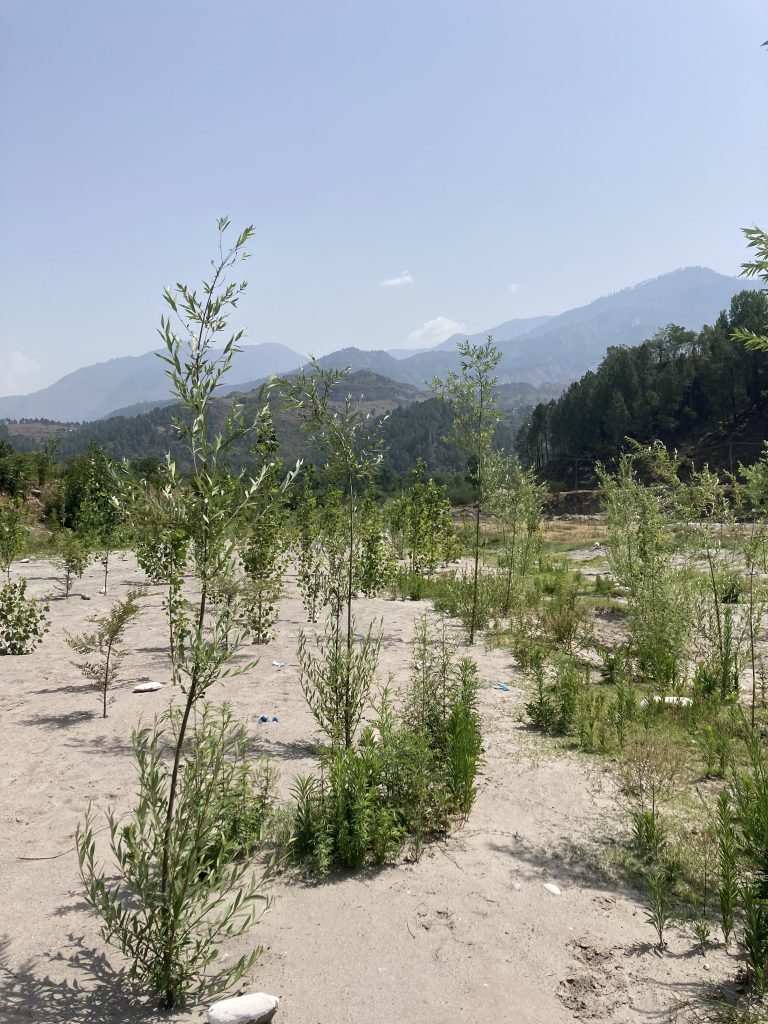 An afforestation site along the banks of a river in the south of the Kaghan Valley.
Photo by Jamie Hinch, TGP.

Today, the Bakarwal people remain one of the most marginalised communities and are mostly landless, facing daily societal and systemic discrimination that threatens their lives and ancestral lifeways.(5) In spite of this, Nazir and 25 members of his family continue to migrate with their 500+ sheep and goats. In recent years, Nazir noted that the Bakarwal people and their way of life were becoming more vulnerable to stronger weather patterns. With it being so hot so early this year, Nazir’s family travelled in mid-May to the mountain pastures- a journey normally beginning in June.

With the implementation of the 10-BTAP project, Nazir explained the material consequences of afforestation to his community and their access to their traditional lands. Before planting began, “we were coming along the roads and entering the forest, coming back to the roadsides and going up again in the forest; taking shortcuts, before reaching our destination”. However, since 10-BTAP and its predecessor the ‘Billion Tree Tsunami Afforestation Programme’ began, the Forest Department of the Pakistani government have forbidden the migration of the Bakarwal people through the extensive afforestation and natural regeneration enclosures established as part of 10-BTAP, believing that their sheep and goats presented a threat to the trees. Evicted from the forests, the Bakarwal people are now forced to walk exclusively along roadsides; however, even this is difficult as 10-BTAP’s sites often run parallel to roads, meaning there is now minimal legal grazing available to the herds.

For Nazir and his family, the undesirable, expensive solution is using vehicles to transport their animals between pastures. Nazir pays 30,000 Pakistani rupees (£122.48) per vehicle totalling 1.5 lakh rupees (£1615.17) per year. These extra financial costs are exacerbated by the health impacts to their animals. Not only do the animals miss out on natural medicines found in the forest, but their vehicular journey is dangerous. Nazir described to me the risks and loss involved:

“5-6 goats we lose in transportation [per year]. This is because of pneumonia and temperatures; these are the common diseases of our goats which were not previously occurring to us. The travelling [by foot] helps the goats gradually come to mountain areas which acclimatises them, but with the vehicles within a few hours we reach here, and the temperature is totally different.”

As a result of limited mobility and the increased costs of their intergenerational way of life, Nazir and his family, along with many other Bakarwal people have had to adapt to an agrarian lifestyle.

“The loss of livestock is increased, so that is why we started cultivation and farming. These were useless waste lands, so we decided to cultivate them because… the living expenses which we spend on the transportation is an extra burden on us.”

Nazir and his family are not alone in starting the seasonal farming of peas and potatoes; the higher we rose in the Kaghan Valley, the more frequently we saw Bakarwal people engaged in this high-altitude seasonal labour. It is something Nazir stressed they adamantly do not like- but, “we have no other option though, this is the only way”.

The profit they make per bag of produce is minimal. There are numerous taxes and penalties they must pay. For example, Nazir referenced that they pay 450 rupees per bag to local landowners- the same nawabs whose families were given land by British colonialism. “We get nothing”, Nazir shrugged. The government and landowners are not the only ones taking advantage of the Bakarwal people and their worsening situation. Local, settled communities charge extortionate costs for seeds and fertilisers. This is alongside the overpricing of other essential commodities. As Nazir pointed out “local people overcharge us! They charge us double. We buy 40 kilograms per bag of flour for 3800 rupees – a huge amount for us, almost double [standard rates]. Because people dislike us.” 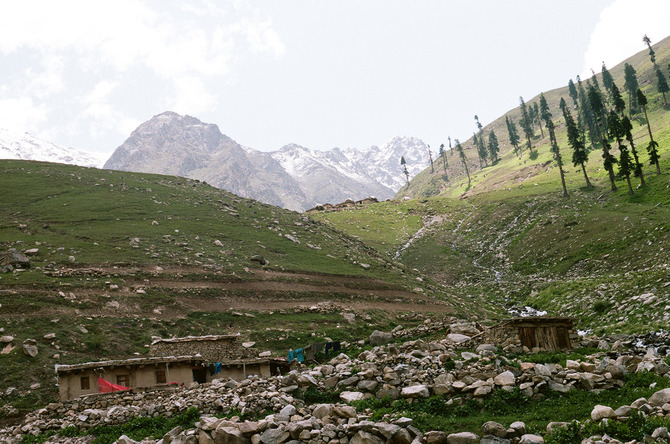 Grazing land in the north of the Kaghan Valley. Photo by Jamie Hinch, TGP.

These issues may appear far removed from tree-planting, but Nazir was explicit that 10-BTAP was exacerbating their marginalisation. The knock on effects that their denial of land access is having are multifaceted and intersectional. 10-BTAP is incredibly ambitious, deserving much of its praise, but Nazir’s narrative reveals that this praise should be caveated with how the project can better include marginalised communities.

Writing from Britain, it is vital we reflect on the longer history of this marginalisation and Britain’s ‘decolonisation’ which led to unequal land ownership, access, and disproportional state power. This blog post was written in the midst of COP27, where developing and frontline countries are pushing the conversation towards the overwhelming case for climate reparations. Pakistani Prime Minister Shehbaz Sharif, vice chair of COP27, has been especially vocal in pushing for loss and damage financial mechanisms:

“[Transparency] should not be used as a delaying tactic for supporting people in need. These failures need to be kept separate. We are asking for climate justice.”

I end this blog post with Nazir’s call for people to listen to his narrative: “I never ever raised my voice or complained. We think that, if we raise our voice and complain and go to the police station, some of us think that if we go there then we will do more damage… To whom we can submit our requests?”